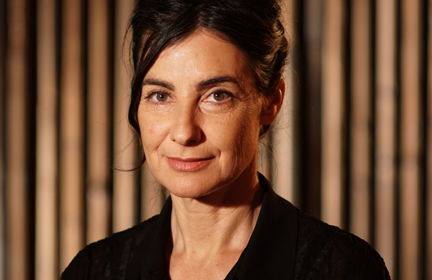 Artistic Director and Co-Founder of the Vertigo Dance Company

Noa Wertheim, the artistic director and choreographer of the Vertigo Dance Company, was born in the United States in 1965 and grew up in Israel where she first studied dance in Netanya. After three years of military service in the developing town of Yeruham, Wertheim completed her dance studies at the Jerusalem Academy of Music and Dance in 1990 and, in 1992, together with Adi Shaal, founded the Vertigo Dance Company, which is based in Jerusalem and in the Vertigo Eco Art Village in the Ella Valley where she lives with Shaal and their three sons.

Under the artistic direction of Wertheim, who is an Honorary Fellow of the Jerusalem Academy of Music and Dance, the internationally acclaimed Vertigo Dance Company has begun its third decade with an impressive repertoire of original works choreographed by Wertheim, whose distinct dance language inspires dance students and artists by encouraging interpersonal communication and community involvement.

Beyond her contribution to cultural life in Israel, Wertheim’s unique approach promotes social change by creating an artistic connection with the community and the environment, and this has been evident in the Vertigo Dance Education School, founded in Jerusalem in 1997, in the Vertigo Eco Art Village, founded in Kibbutz Netiv Halamed-Heh in 2007, and in The Power of Balance, a dance program for inclusion of the disabled.

2016       Israel Ministry of Culture and Sport – official recognition of Vertigo as a large dance company.

2012       Ruderman Prize, for The Power of Balance, a program for inclusion of people with disabilities.