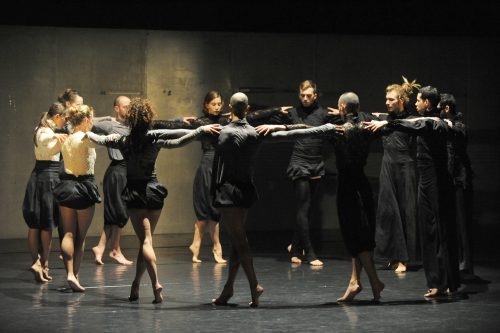 Balet. The Vertigo Dance Company from Jerusalem is showing the rousing piece “Vertigo 20” by choreographer Noa Wertheim. The piece premiered for the occasion of the 20th anniversary of the founding of the group.

During the beginning and the end floating balloons are hinting at a funfair situation, together with music that reminds you of barrel organs, which could be derived from a circus. But that doesn’t mean that we are actually at a funfair or a circus. Rather we are located in a realm of images and phantasy. In the one-hour sequence of scenes “Vertigo 20” everything is only indicated – and like this left to the imagination of the audience.

The performance is a Best-of-compilation of choreographies, elaborated by the Vertigo Dance Company in 20 years of their existence by Noa Wertheim and her partner Adi Sha’al, who founded the company in 1992. As a “Potpourri” it is surprisingly homogeneous and round, just the one or other alternation appears abruptly. On the one hand side Noa Wertheim invented an own dancing language for her company, which is based on the other hand on a philosophy of life in which the ecological awareness has an important role.

It takes a certain time until which the versatile production takes the ride. Afterwards speedy and rapid scenes are changing with touching intimacy. In the first 20 minutes the young dancers – five women and six men – are moving rather calm and measured, interrupted by violent, cutting arm movements, that sometimes remind of puppets or when the dancers form a formation the military drill. Indeed Sha’al had the idea for the name “Vertigo” – dizziness – during his military training at the Israeli air force.

The soundtrack by Ran Bagno with elements of  the waltz, march and techno, oriental elements and Israeli folk music, with accordion and drumbeats often acts archaic and suggests initiation rituals, which picks out the relationship between the single to the whole as a central theme. This impression is underlined by the stage set: it consists of three grey walls with small ledges: On them the dancers are sitting like sculptures, which are waiting to return to life. Also the black-and-white costumes (by Rakefet Levy, from whom is also the stage set) are ambiguous, which combine Victorian clothing and sports trousers; especially noticeable are the towering hairstyles of some of the female dancers – a fabulous idea. The play of the shadows on the walls are able to magnify the space and double the dance scenes (Light. Dani Fishof).

The magic of the performance results not least from the hardly noticeable transitions between the dancing pieces: from one moment to the other the images has changed, instead of a compact group, where the dancers act like mechanical puppets, occurs a circuit that increases into an overexcited runout: an enthralling, orgiastic celebration, a dance of the living. Close to the ending even slapstick elements and a smiling group image like in the silent film era can be found; it only lights up briefly, like an image out of a dream. Enchanting also the last scene, when floating, yellow glowing balloons are selected and single dancers with nearly unseen movements are stepp9ing into the front – this scene can be read as an allegory read on dance, which is nothing else than a dream under the conditio0ns of gravity, earthbound lightness.