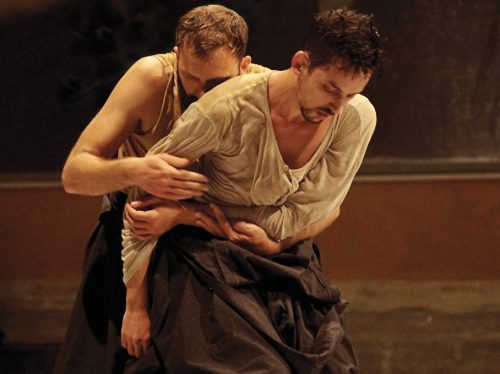 Pardes enjoys smooth transitions between rather short sections; a change between mellow moods to more intense ones, group sections replacing short duets, in a pleasing flow.

‘VERTIGO’
(photo credit: ELAD DEBI)
Vertigo artistic director Noa Wertheim has added another original creation to her long line of dance works dealing with spiritual content – as well as environmental and social issues – often referring to various shades of faith along the way. Fortunately, she wraps her investigative process with rather vague abstract body manifestations that perfectly fit contemporary dance genera and her own sensitivity.
With the years, Wertheim has succeeded to solidify a rather consistent artistic voice that borders on New-Age perceptions that worked for her for decades. In that sense, Pardes is a great test case for a choreographic endeavor synced to perfection with original music, written by talented percussionist Itamar Doari. Apparently Doari, who worked with the company during rehearsals, interwove and recorded the music with dance sections on site.
Both artistic disciplines synced rather well on stage. Wertheim used the title Pardes and its various cultural ties – among them the Kabbalah but mostly to the word’s origin in ancient Persia language – which supported the dance’s mystical rites accentuated with its tribal-like costumes. All six dancers perform while wearing black skirts, an attire that has always worked in any dance that wanted to add a tribal aroma of yesteryear, borrowed from unspecific cultures or folkloric sources. They also work in bits from Sufi rites and Eastern European folk dance, like barrel jumps, which fit in quite effectively.
Just to make sure that the point was clear, Doari later added more specific Oriental musical flavors, and Wertheim added more gyrating pelvises.
Pardes enjoys smooth transitions between rather short sections; a change between mellow moods to more intense ones, group sections replacing short duets, in a pleasing flow. There was one exception, depicting an abused girl by her duet partner. That initiated a prolonged scene which brought to mind the long dying scene of the betrayed Giselle, without her finesse.
Pardes proved to be a finely crafted work by Wertheim that was filled with pleasant scenes, particularly some duets and a few solos. It seemed to cater to larger audiences without risking stepping out of the choreographer’s safe zones, or daring to challenge her audiences and herself.
Those six dancers on Suzanne Dellal’s stage, confounded by opaque red panels, worked well as an intimate ensemble with well-polished dancers, and each one of them was noticed.