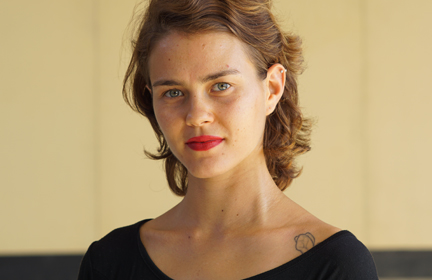 Born in 1989 in Saint Petersburg, Corina grew up in Beit Shemesh. At the age of 6 she began her dance studies at the Yad Harif Arts Center in Kibbutz Tzora, while competing nationally in artistic gymnastics championships. In 2004, she won a scholarship from the Omanut La’am Dance Flow project, and in 2006, continued her training at the Tamara Mielnik School of Dance and at the Jerusalem Dance Theater directed by Mielnik. In 2007, she enrolled to the Maslool dance education program of Bikurei Haitim Arts Center in Tel Aviv, directed by Ofir Dagan. Corina worked with choreographer Dafi Altabeb before joining the Kibbutz Contemporary Dance Second Company KCDC 2, in 2008. A year later, she joined the main company KCDC for 6 years participating in works by Artistic Director Rami Be’er, as well as other choreographers such as Itzik Galili, Idan Sharabi and Oz Mulay. In 2014, she joined the Batsheva Dance Company Ensemble participating in works by Artistic Director Ohad Naharin as well as choreographers Sharon Eyal and Danielle Agami. Corina, a graduate of the Ilan Lev Method and a certified GAGA teacher, collaborates with choreographers Inbal Shachar, Gil Kerer and Bosmat Nossan and is a member of the Playground dance and music improvisation group. In August 2017, Corina joined the Vertigo Dance Company.