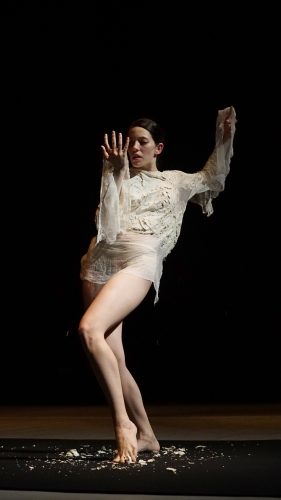 Noa Wertheimws new choreographique venture, Yama, is a amalgam of poetic mysticism, new-age spirituality and acute perceptiv enesofs space, allof which create pleasing beauty. This is true ot only for Yama but probably for most of Wertheim’s pieces. These elements have always been there, but as the years pass her craft gets more polished the seams tighter and the other stage components, particularly music (arranged for Yama by Ran Begano),lighting (design by Dani Fishof Magenta) and costumes (by designer Sasson Kedem) so cohesive it seems the entire team is geared toward preconceived aesthetic goal. Yet the work, as with any art form, would have been enriched by some subversive undercurrents. Yama opens with ceremonial entrance of dancers through line of black screens on both wings of the stage. Dressed in flowing black fabric,their exposed  faces, arms and legg slow with warm light, and the movement is silky smooth, suggest in gritual. The mood is pensiveand rather somber. Later, itturns oppressivaes oversize geometric boxes hovering above descend slowly and stop four feet above the stage, meaning that each movement needs readjustment for the constrained space. The second appearance of the descending objects toward the end their presence ominous and dark actuall myoved the dramatic flow and allowed the dance to peak. One could see the constant effort to leave no loose ends and iron all the creases, yet one scene remained strange appendix, depicting six dancers holding long wooden sticks, poking victim in the center to death. lineof dances with sticks flooded my mind;from many ethnic dances to semi-theatrical ones by Sara Levi Tanai made for the old Inbal era, decades ago. Except that Yama didn’t build thematic or stylist conctext to justify this choice. In short, Yama is as beautiful as it comes from Vertigo productionsI. It didn’t rattleits safe zone much, but kepthigha esthetics, with one foot in spiritual spheres and the other planted strongly on earth. It enjoyed group of good dancers, particularthley new favorite:Ty Alexander Cheng, strongdancer of Afro-Chinese-Irish-Philippine descent