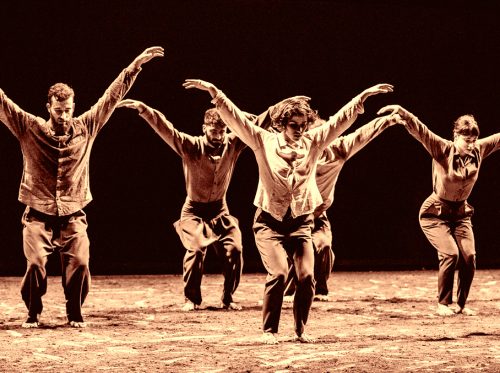 IMPRESSIONS: Vertigo Dance Company’s “One. One & One” at Baryshnikov Arts Center 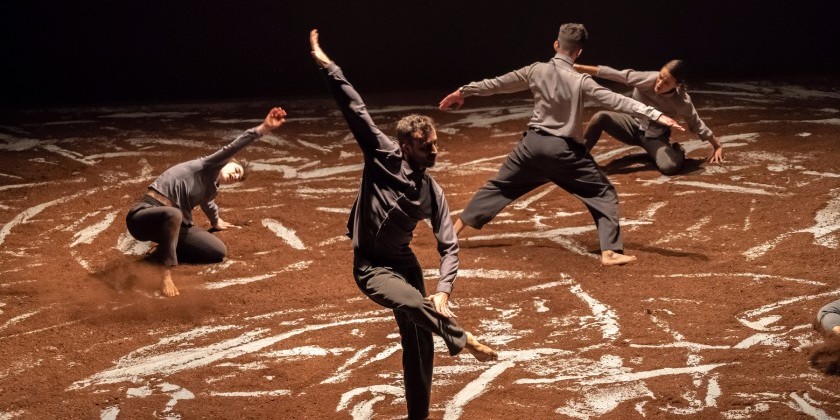 Extending one arm, a woman leans back with an elasticity so languid as to suggest the aimlessness of long, hot days. Downstage of her, a man walks backward as he empties a can of dirt in a straight line. And so One. One & One begins. 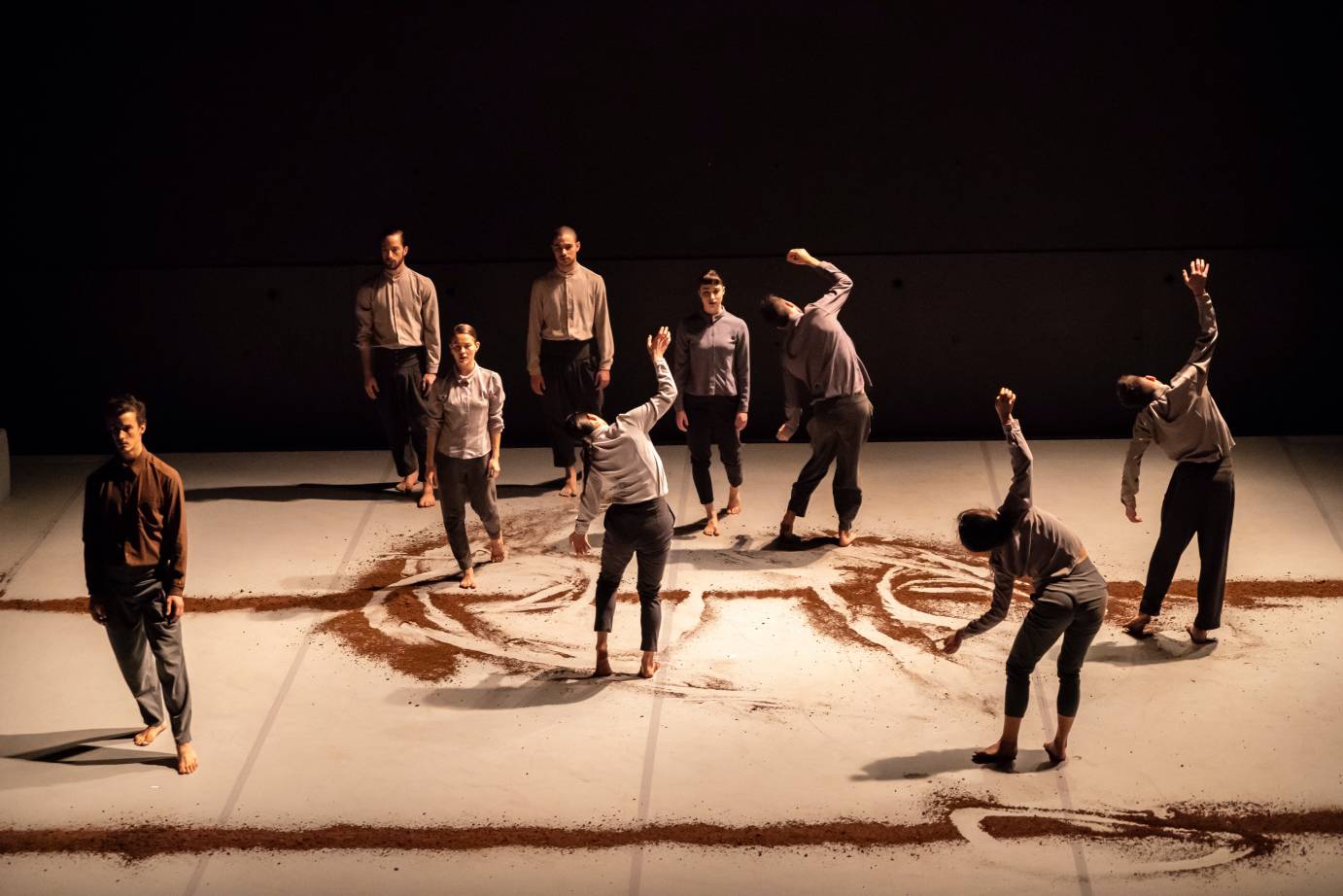 Vertigo Dance Company’s One. One & One at Baryshnikov Arts Center; Photo by Stephanie Berger
At the close of this hour-long piece, nine barefoot dancers have joined on what is now a floor covered with dirt. The dancers have swished the dirt into hieroglyphics that perhaps no one can decipher. Facing the audience, the company offers a peaceful farewell, raising and lowering their arms with their feet in parallel. They look like a flock of birds moving as one.
Israel’s highly regarded Vertigo Dance Company packed Baryshnikov Arts Center to perform this meditative work. Choreographed by Noa Wertheim and Rina Wertheim-Koren, it shows passages of explosive energy and abstract design with refreshing musicality. Avi Belleli’s mesmerizing score is marked by three extended pauses for silence, made further dynamic in its mood swings between the mournful and frenetic. The dirt — its smell, dust, and malleability —transports us to a country bound by the desert. 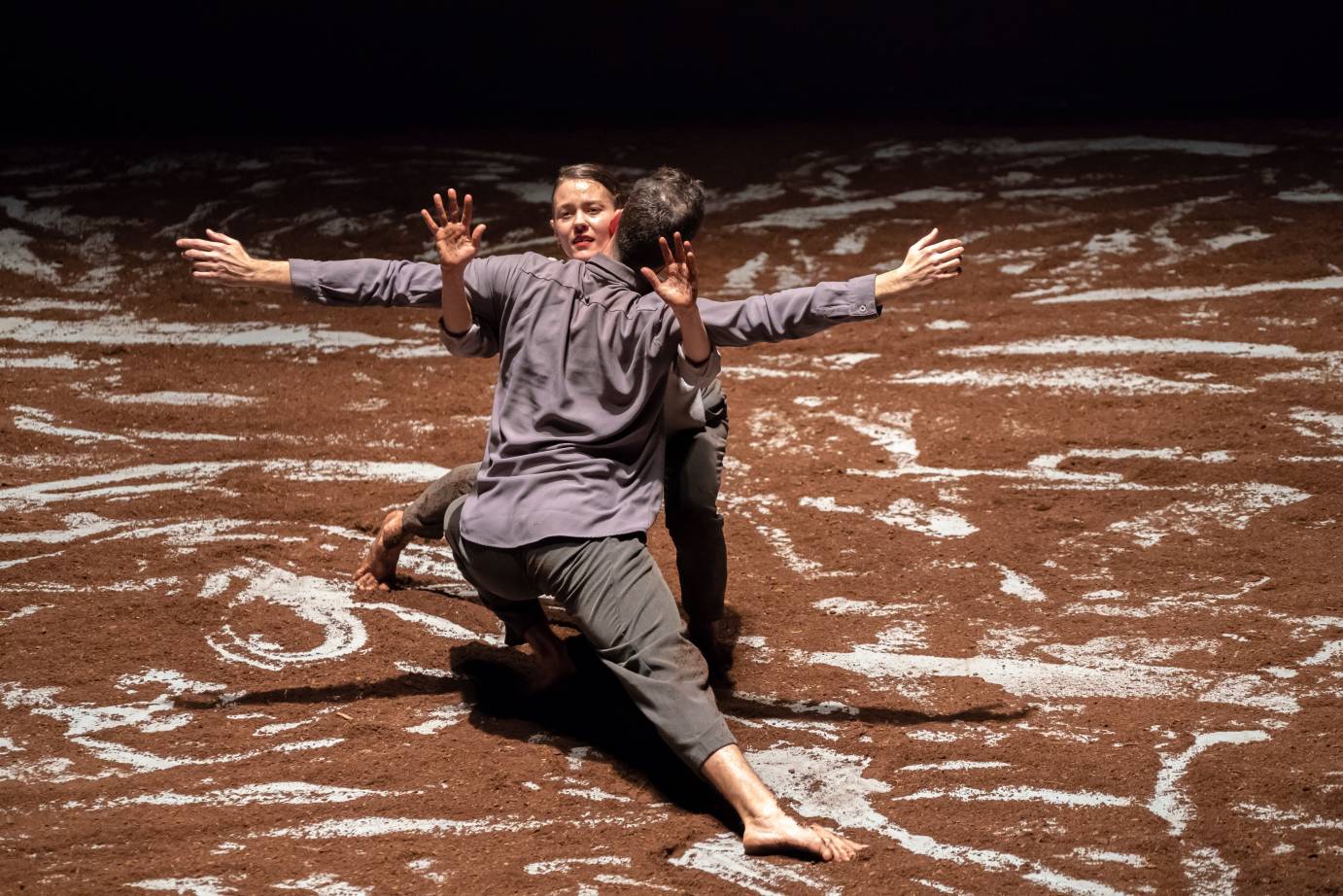 Vertigo Dance Company’s One. One & One at Baryshnikov Arts Center; Photo by Stephanie Berger
Several duets stand out. Two women mirror each other’s slow-motion curves and stretches. In another, a woman holds on to a man’s arms as he swings her around and around in the space emptied of others. Some of the unison choreography evokes folk dance with one hand hitting a foot behind the back or performers jumping into second to make the dirt fly. Right hands held aloft could easily be gripping cell phones taking selfies were it not for their furious shaking.
In the middle, four young lithe women run and jump repeatedly into the arms of five stationary men. The men repeatedly slap the back of their hands on their thighs with enough force for the hands to rebound and hit their chests, thus making a four-beat cycle. The gesture suggests frustration and/or a body percussion game that induces a trance.