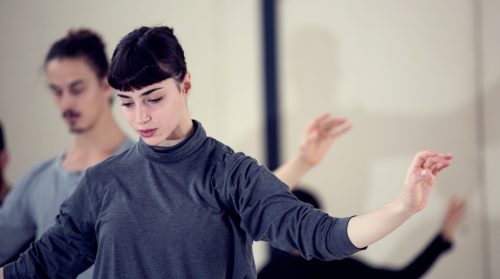 One. One & One – Contemplation Dance. Zvi Goren, HaBama

One. One & One – Contemplation Dance

The premiere of Noa Wertheim’s new piece joins at least another three milestones marking the 25th anniversary of the Vertigo Dance Company, founded by Noa with Adi Sha’al. They first met at the Jerusalem Tamar Dance Company, danced a duet titled Vertigo later to become the name of their new founded dance company.

Nature as a Medium

Together ever since, their adventurous journey incorporates dance and the unique lifestyle that have led them to build an ecological village where alongside family members, artists and dancers, they reaffirm the link between art, human and nature. Their elaborated story published now in a fascinating album book titled, Vertigo – A Choreography of People and Dreams, written by Uriah Kadari for HadKeren publishing, is yet another well-deserved cause for celebration.

Another milestone is the recent decision of the Israel Culture Administration to award Vertigo the status of a major dance company acknowledging the remarkable scope of their cultural contribution that includes dozens of international performance tours – from China to Morocco, Ethiopia to South America, the United States, the Balkans and all of Europe.

In this new piece created together with her sister, Rina Wertheim-Koren, Noa resort again to nature as a medium. A prism that allows for further observation of the human soul, the individual’s oneness or personal unity as well as the ability and desire to connect with the other. Set across the deserts of loneliness, detachment and separation and the immense longing to reunite, this is, in essence, a depiction of the course of a social life, from the smallest cell to the collective.

Indeed, this piece opens with two separate individuals: a male dancer pours soil along the front of the stage, while a female dancer concentrates on a magnificent solo interrupted only when three male dancers embrace and lead her into the expansive realm of human reflections. Moving along a seemingly fashion runway dressed in the beautiful costumes designed by Sasson Kedem, passerby pace back and forth on a map of intertwining streets featuring random contacts, selected connections, and the inevitable separation.

Gradually, dancers add strips of land, until the entire stage is covered. This scene serves to confirm the impression that this is Wertheim’s attempt to review her roots. It seems to refer to the move to the ecological village that resembles a separation from urban living and connecting to the organic way of life, as well as to the building blocks of her distinct dance language through quotes from her early creation of Birth of the Phoenix.

Wertheim picked a thought provoking theme: “And thus would he count: one, one and one, one and two, one and three, one and four, one and five, one and six, one and seven” (Yoma, Chapter 5, Mishna 4). There is a nice sound to it however, the message it conveys is quite startling taken from a text relating to the Yom Kippur sacrifices. There is also a military adaptation of this particular motto used in handling a grenade – “And thus would he count: twenty-one, twenty-two, twenty-three – explode”.

From beginning to end, we can experience a great drama, not necessarily linear although in some scenes there is an apparent narrative. Throughout this choreography, voicing the inner restraints while responding to new laws that defy the old order, the movement itself is dramatic. Each and every dancer is brilliant – four female dancers: Liel Fibak, Nitzan Moshe, Shani Licht and Tamar BarLev; and four male dancers: Etai Peri, Sándor Petrovics, Daniel Costa and Ron Cohen – exploding with talent and spectacular movement.

Indeed, an explosive effect is created on the set, accentuated by but not limited to the upbeat as well as the more soothing music of Avi Balleli. The sacrifice ritual is omnipresent. Forms of structure vary from duets to trios, a solo, an ensemble, and the grand dance company, which they are. Constantly observing each other, disappearing from the setting, designed by Roy Vatury and the lighting, designed by Dani Fishof-Magenta, only to return and revive the land that was not sown with their faith and their craft.

Hence, the time has come to a festive meeting with the Vertigo Dance Company celebrating their 25th anniversary.