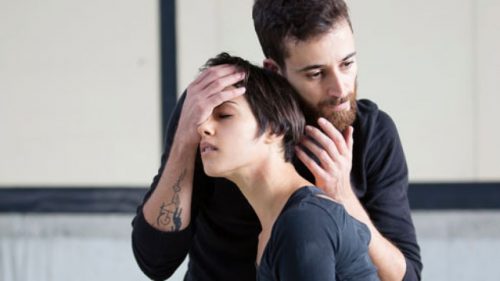 One. One & One – Inevitably Political Art. Tal Levin

A few years ago, I interviewed the founders of Vertigo Dance Company, Noa Wertheim and Adi Sha’al, asking them about the cultural differences between Jerusalem and Tel Aviv. Both, who over a long period opted for the Holy City, expressed their need for a peaceful façade-free space to enable the creative process. This prerequisite was apparently attained when the company (and family) moved to Kibbutz Netiv HaLamed-Heh, where they established the Eco-Art village, incorporating artistic creation and the promotion of community relations and activities. This geographic location to a certain extent hints to the status assigned to the creative path of Vertigo in the Israeli dance scene over the years, for better or worse dismissing popular trends. While upcoming local creation leans more and more towards the performing arts, further accentuating the political thematic approach, Noa Wertheim draws inspiration from spirituality, poetics and pure aesthetics.

One. One & One, a new dance piece by the Vertigo Dance Company, revolves around the spiritual aspect. The program includes a quote from the fifth tractate of Seder Moed (Order of Festivals) of the Mishnah: “And thus would he count: one, one and one, one and two, one and three, one and four, one and five, one and six, one and seven” (Yoma, Chapter 5, Mishna 4). Wertheim suggests an initial interpretation referring to the wish to be united versus separateness, the struggle between inside and outside, and so on. The opening movement accompanied by the chanting of words (“void”, “nature”, “space”, “discourse”, etc.) also resembles semi-abstract mantras. However focusing solely on this annoyingly vague interpretation may distract our attention from the actual political statement conveyed more forcefully than ever before by Wertheim who perhaps despite her intentions (whether expressing freedom of the creator or the creation) cries out the insoluble pain of the reality of our lives.

This piece begins with a dancer moving across a straight line pouring soil on the floor. Soon the soil covers the entire surface as dancers move, roll about, scattering grains in the air that become an integral part of their bodies. This choreography includes sections of restrained movement, confining the exploding energy of the dancers, as well as entire segments of raging ferocity. More than ever before One. One & One manifests Wertheim’s ability to move between these modes in a timely manner allowing the subtle moments to highlight the tempestuous and vice versa. With a precise amount of liberated motion, there is no exaggeration whatsoever, resembling a carefully choreographed no-rules wrestling with modest rhythmic and measured gestures. Likewise, the soil assumes various representations appearing as – a border, swarms of blood, a plowed field, a boxing ring and at the end – the sand from within a flapping winged bird emerges.

Even in its less powerful moments, Wertheim’s creation, inspired by the teaching of Mishna Yoma, focuses on earnest social contemplation. Not merely in the abstract sense of examining the ethical relationship between the individual and society, but reviewing the innards of “Israeliness” and the meaning of land as its source of strength as well as its Achilles heel. The fought for space as well as the substance, which is constantly ruined, wasted and mistreated.

The collaboration with musician Avi Balleli is one of the merits of this piece. In my opinion, the longstanding cooperation between Wertheim and musician Ran Bagno was beginning to show (and sound) played-out. Balleli complements this choreography with his own interpretation through music. Not merely accompanying the movement but creating a discourse, accentuating what the choreography attempts to conceal rather than the obvious. A subtle and peaceful segment transforms into an alarming battlefield simulation with the sound of firing cannons; and a reference to an Israeli pioneer dance from the early days of the establishment of the State gets an interesting twist with Arabic music. Another successful collaboration is with designer Sasson Kedem, who also designed the costumes for Wertheim’s previous work. Like Balleli, he accentuates elements, which perhaps she hesitates to express directly through her choreography. The result is a work of art that outlines a dense and gloomy climate. Nevertheless compelling us to follow the dancers to the finale, wave hands and hope for resurrection.