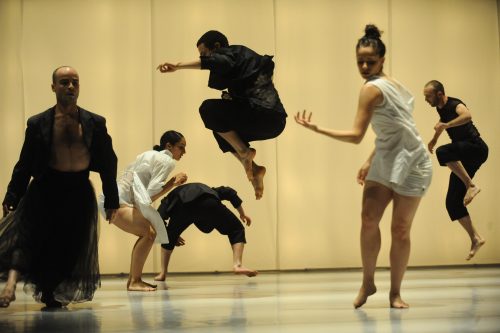 Null – A Work in Progress by Noa Wertheim.AYELET DEKEL

Dance is an art form created between people. With the exception of a solo performed by a choreographer, the process of creating a dance almost always involves several people: choreographer, dancers, rehearsal director, costume set and lighting designers, and musicians. Over time, a dance company becomes a community, for the Vertigo Dance Company this sense of community is an integral part of their vision.

In this spirit, the company invited visitors to the studio in late April to watch rehearsals in progress for Noa Wertheim’s new work: NULL. The dance will premiere on June 12, 2011, opening the Karmiel Dance Festival 2011. In anticipation of the premiere, there will be a performance in Jerusalem on June 6, 2011 at the Gerard Bachar Centre, where the company has made its home for many years.

On entering the room, one change was immediately apparent: in this work Rina Wertheim Koren had moved from the dance floor to join Noa, the two sisters and Sandra observing the dancers intently.  Taking a seat alongside them, some of the dancers were familiar to me, others, who have recently joined the company, I encountered for the first time.

As the dancers moved, I recognized the impulses I have come to identify with Noa’s work: a strong connection to the ground that pushes up to leap into the air, the ever-shifting balance of power and movement between the individual and the group, a presence at once symbolic and exuberantly physical. Large movements demanding strength, speed and agility are interwoven with moments of delicate nuance: a hand spirals down the length of the torso like a feather in the wind, three hand gestures in different relationship to the body repeat like words in sign or code at different intervals in the dance, acquiring a symbolic significance.

Noa briefly commented to me that as she was in the process of editing the work, the dancers were not dancing full out, but only marking. The three women observed, reflected and commented on the dance as it took form on the studio floor, and the dancers commented freely as well. Trying out different sequences, experimenting, repeating the same section over and over again, yet each time with a subtle difference that alters the feel of the movement. The intensity of the work is difficult to imagine, commanding complete dedication of the body and mind, it is mesmerizing to observe.

When the dancers took a break, Noa took time out from NULL to tell me about the work in progress. “The music is growing with the work,” she said, “What I am seeing now is in different sequence. Two weeks ago I had 50 minutes on silence; the costumes were set up, half the info was there.”

Noa explained that in embarking on NULL, Ran Bagno, who has composed original music for most of Noa Wertheim’s choreography, “felt that the dialogue we were accustomed to in the past wouldn’t bring out this work to its fullest. I love to work with him, we’ve been working together for 15 years and I wanted him to stay with me.” The solution they found was to add a musical partner, Stefan Ferry, a former dancer with the Batsheva Dance Company who had worked with the Vertigo Dance Workshop, to “bring something new into the mix.”

The process was not always easy, recalled Noa, “We each have different languages, different perspectives. We had some difficult moments, but suddenly this week something started happening. Stefan brought another dimension into the soundtrack, layering the sound. Ran and I never worked like this before. I still don’t understand what is happening…”

In the empty space of the studio, Noa gestured to indicate the visual aspects of NULL, saying, “On the right there will be a white fabric lit from behind and also on the back two flat strips will create large walls of light, and the audience will be somewhat lit. I never saw it; I just have it in my mind. We saw a model. Rakefet Levi and Dani Fishof are working together. There will be white bathroom tiles on the fourth wall; it somehow reminds me of teeth…and some source of water like a sink that reminds me of a public bath.”

The flow of her words, images, ideas and associations is as free, fast and full of same explosive energy she brings to her work on the stage. Noa explained that in this work she began by researching the movement on silence, the advantage being that “without sound I can always play with the editing.” This process of editing, is what I had the opportunity to experience in the studio, to see the work in the eyes of the choreographer as she saw it in that moment. “Everything is open,” she said, “like Lego.”

“I always have two motives that are opposite,” said Noa reflecting on her work, “The world is always structured that way – good and bad. Mana related to the space and the new work, NULL relates to time.” She explained the kind of exploration undertaken in the work, demonstrating that “different movements contain the same energy, released in different time segments for a very different feel and impact.” She said that this work also originates in the experience of her relationship to time as a woman reflecting on her life, “All I do is listen to something deep that exists in the universe, give myself up to it, and begin to create a world, in layer upon layer, connected to time.”